What causes a blister on eyelids? What treatment options are available? Are the blisters a serious health concern? Is the condition contagious?

Here are the causes, pictures and treatment options for eyelid blisters and bumps.

Blisters on eyelids are not just an aesthetic concern. They can as well be a health concern, especially if they are severe, chronic, or persistent or suddenly gets blood or pus-filled. Among the most common causes of eyelid blisters are: 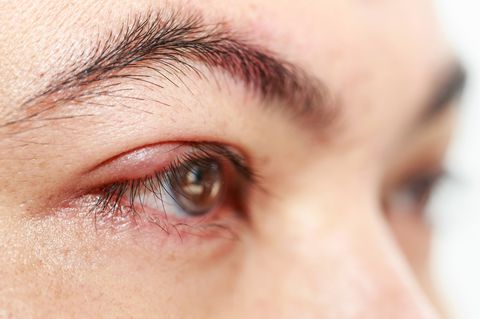 Medically known as ocular herpes, eye herpes is a recurrent but rare viral infection that is caused by the herpes simplex virus. The term herpetic eye disease is also often used to describe this condition which ranks among the most common infectious cause of corneal blindness in the United States as the Right Diagnosis website notes.

Varicella zoster virus is the same virus that causes shingles and chicken pox in humans. When it affects the eyes, the term Herpes zoster opthalmicus is often used. Herpes simplex type 1 virus is, on the other hand, the same virus responsible for cold sores on the mouth and lips.

Both Herpes simplex type 1virus and Varicella zoster viruses are found naturally in most adults. Herpes viruses typically thrive around nerve fibers without causing any trouble but in some cases they start to multiply and/or move to other areas of the body where they cause disease breakouts.

Although the exact cause for such outbreaks is unknown, stress-related factors the likes of fever, sunburn, trauma, and surgery have been linked to incidents.

Of the two types of ocular herpes, herpes zoster ophthalmicus is more likely to cause blisters on eyelids in addition to other symptoms such as redness, corneal swelling, and pain around the eye. Both types of herpes are very painful since they directly affect the nerves.

Sunburn may also cause a clear, watery blister on eyelid. The term sunburn is used to refer to skin damage resulting from excessive exposure to sun’s ultraviolet radiation, more specifically UVA and UVB rays. Sunburn typically manifests itself in skin reddening and soreness, and swelling for more severe cases.

Sunburn blisters are usually an indication of second degree sunburn which extends beyond the first layers of the skin, the epidermis, into the dermis layer.

In addition to blistering, you may as well experience other symptoms such as nausea, fever, chills, headache and general weakness. A few days down the line, your skin will then start peeling and get itchy as the body tries to heal itself and remove the affected cells.

Commonly known as acne, Acne vulgaris is another likely factor for a blister on eyelid. Acne is a skin disorder that results when the tiny holes in the skin called pores become clogged with oil, dirt, and bacteria. Acne may occur on any area of the body but it tends to appear more on the face, back, chest, and neck.

Mild acne manifests itself in small whiteheads and blackheads, but more severe acne may cause large, often painful cysts and pustules. Pustules are usually yellowish in color and fluid-filled (blister-like).

Atopic dermatitis is a chronic skin condition that is notable for scaly, itchy rashes. It is often passed from parent to children and although it can appear at any stage of life, it most commonly appears during childhood and diminishes in early adulthood.

Over 50% of infants with atopic dermatitis grow out of it, but flare-ups later on in life are also possible.

Atopic dermatitis is thought to be due to skin reactions that are similar to an allergy and factors such as skin infections, harsh soaps, allergens such as dust mites and animal dander, weather changes, stress and certain foods such as soy and wheat have been shown to worsen it.

Atopic dermatitis usually manifests in dry, itchy skin which becomes inflamed (swollen) and red when scratched. Tiny blisters that ooze and then crust may also develop. The symptoms come and go and with time, the affected area of skin may get thickened.

Contact dermatitis is a common skin condition that causes itching, redness, inflammation and blistering of the skin after the patient has come into contact with a certain substance.

Although contact dermatitis is not contagious or life-threatening, it can be an aesthetic concern and may as well be very uncomfortable.

Symptoms and their severity vary from one person to another depending on the underlying causative factors and nature of exposure but it is common for the skin to swell and develop a rash that is itchy as well as oozing blisters.

Eyelid blisters may tend to occur more commonly on the eyelid rim, but they may as well occur inside the eyelid or under the eyelid. Blistering may also occur on lower eyelid, upper eyelid, or both depending on the underlying circumstances.

The pictures below gives a visual picture (pun intended) of these different positioning of the blisters.

This picture shows a patient with little blisters on both upper and lower eyelids due to Herpes Zoster.

Now that we know some of the common causes of clear (watery) blisters on the eyelids and even taken a look at some pictures of the same, let’s discuss the common treatment approaches.

Treatment for Clear Blister on Eyelid

As with most viral infections antibiotics such as penicillin are usually an effective treatment for ocular herpes. Antiviral medications are instead used.

Surgery may be required for cases that result in scarring of the cornea.

Sunburn blisters treatment revolves around treating the symptoms while preventing further skin damage. A cold compress (a washcloth dipped in cool water) or a cool bath is a good starting point. Aloe vera juice is also an effective home remedy for sunburned eyelids.

In addition, you may want to take over the counter pain relievers such as ibuprofen, naproxen etc. to relieve pain and swelling.

A word of caution: While it is very tempting to pop that clear blister on your eyelids out, you actually shouldn’t. This only sets stage for potential infection. Should the blister however break on its own, apply over-the-counter antibiotic cream such as Bacitracin and Neosporin to prevent infection.

Atopic dermatitis is chronic and cannot be cured but several measures can be taken to control it. You will for example want to:

Your health care provider may also prescribe corticosteroid creams and antihistamines to control the symptoms, particularly swelling an itching.

Some pustules will go away without treatment but if that does not apply to your case, your first line of action should be over-the-counter acne creams, soaps, and medications.

These typically feature salicylic acid, benzoyl peroxide, or sulfur as the active ingredient, but they should not be applied in pubic area. Sulfur-based products should also not be used by patients who are sensitive to sulfur.

Your dermatologist may as well prescribe oral antibiotics such as doxycycline, erythromycin, Minocycline, and tetracycline or topical antibiotics such as dapsone if your case of acne is caused by bacterial infection. These may be administered alongside a prescription-strength salicylic-acid based cream or Retinoid such as Tazorac, Differin, or Retin-A.

Your dermatologist will decide what options are best for you. A treatment regime usually incorporates both of these options.

Other treatment approaches to that water-filled blister on eyelid due to contact dermatitis or any other part of the body include:

Blood Blister/Red Blister on Eyelids – What it Means

Blisters are tiny fluid-filled pockets that occur on the upper layers of skin as a result of damage to the skin. The clear fluid inside the blisters, called serum, cushions the underlying skin tissues against further damage and facilitate the healing process.

But what about blood blisters on the eyelids, you ask? Well, according to the UK National Health Service, blisters may get filled with blood and turn red, or accumulate pus as a result of inflammation or infection.

Among the likely causes of red blisters, or blood blisters if you like, on eyelids are:

Skin cancer of the eyelids: Skin cancer ranks top among all types of cancer in terms of prominence. It can affect any area of the skin including the eyelids, with the lower eyelid being at the highest risk due to its position relative to the sun. 7

Trauma: A blood blister on the eyelid could as well be triggered by trauma to the eyelid that damages the small blood vessels in the area but does not break the skin. As a result, a mixture of skin fluid and blood gets trapped beneath the skin. This manifests itself in the form of blister.

Moles: Some people confuse moles or blood blisters on eyelids.

Treatment of Blood Blisters on Eyelids

Any case of blood blisters on the eyelids warrants the attention of your doctor who will determine the best course of action after making the right diagnosis.

This is especially true of blood blisters that appear a after an instance of sunburn, scalds, an allergic reaction, or contact with some chemical.

Keep in mind that ignoring an infected blister could lay ground for other complications and diseases such as secondary impetigo, cellulitis and sepsis as the UK National Health Service website notes.

How to Get Rid of Pink Eye Fast, Overnight (In a Day) Naturally, Home Remedies

White Bumps Under Eyes: Causes, Pictures & How to Get Rid of The Spots

Pimple on Eyelid: Causes & Getting Rid of Small Bumps Inside Lower and Upper Eyelids

Common eyelid problems include steyes and infections on the rim.  The symptoms usually present as …

|
©HealthRave Copyright 2018, All Rights Reserved | Disclaimer - HealthRave is for informational purposes only. It is not intended to diagnose or treat any condition or illness or act as a substitute for professional medical advice.